The National Environment and NC 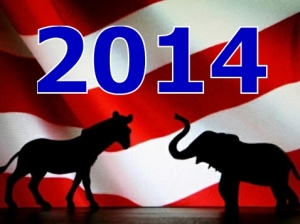 The political climate in 2014 will play a huge role in the outcome of next year’s election results in North Carolina. Given that 2014 is a midterm election, Republicans are hoping for a more conservative electorate. And because Democrats are defending a large number of seats in the U.S. Senate, Republicans hope that next year they will be able to take back that body. Second term Presidents are also notorious for suffering a “six year itch” in which their party loses a substantial number of seats. Therefore, if history is any guide, next year’s midterms, and the national environment, should favor the Republican Party.

The historical tendency of second-term Presidents to suffer major losses in a midterm, however, is a bit overstated. President Clinton’s Democrats actually gained seats during the 1998 midterms, and the 2002 elections during the first term of George W. Bush saw similar gains by Republicans.

The past two midterms, however, have been wave elections where one party made massive gains at the other’s expense. At least in this point in time, it looks like 2014 will see a return to a more neutral environment. With divided government, voters are not likely to assign all of the blame to one particular party. And, worryingly for Republicans, a lot of voters see the GOP as obstructionist and not worthy of electoral reward. The division between establishment Republicans and the Tea Party makes a GOP tidal wave in 2014 difficult to imagine. Though President Obama’s approval ratings are slightly negative, ratings for the GOP are even worse. Republicans seem to be counting on the unpopularity of the health care law to give them a much-needed boost for next year’s elections, a hope that has some foundation.

Nevertheless, at this stage it’s looking like 2014 will see the parties on roughly even ground. That this can change dramatically goes without saying, and given the composition of the midterm electorate it’s far more likely that 2014 will be a Republican year than the other way around.

In New Jersey, Chris Christie’s victory looks assured. In Virginia, however, Republican Ken Cuccinelli appears to be a slight underdog, so it’s highly possible that this will be the year that the pattern is broken. Cuccinelli has been harmed by a variety of factors – mostly his controversial, very conservative views on the issues, his ticket-mate E.W. Jackson, and his connection to the McDonnell administration, which has been harmed by scandal. Cuccinelli’s opponent, Democrat Terry McAuliffe, is also perceived unfavorably by Virginia voters, but despite his sketchy background he is the lesser of two evils. The race in Virginia can change dramatically, of course, but a McAuliffe win would probably cement Virginia’s reputation as an emerging blue state, and it would undermine any narrative of momentum on the part of Republican candidates.

What does this have to do with North Carolina? Plenty. Though voters tend to pay attention much more to national issues over state issues, next year could prove to be an exception. Democrats in North Carolina are fired up, angry, and ready to punish the Republican majority in the legislature. Therefore, the results of next year’s elections will hinge upon the intersection of both the national and the state environments. A national environment highly favorable to Republican candidates could help mitigate some Republican losses in NC. Given the generic ballot lead that Democrats currently hold in the state, if elections were held today it is almost certain that Republicans would suffer losses, possibly of a significant nature.

A couple of months ago, I would have doubted that state concerns could trump national issues. However, it’s certainly possible that next year could prove to be an exception. The anger and passion by liberal activists in the state mirrors the anger and emotion displayed by the Tea Party back around this time four years ago. What state Republicans have in their favor is time. Democrats have the task of keeping their voters motivated and sustaining their momentum through the November elections. The traveling Moral Monday circus is an attempt to do so. Republicans, meanwhile, will have to make an effort to restrain some of their far-right instincts in the interest of defending their veto-proof majorities.

Anger has an expiration date. Remember when national Democrats controlled everything back in 2009? They tried to get everything done quickly. That’s why they rammed through health care as fast as possible. When they ran into obstacles, they were forced to pass it much later than they planned, in March of 2010. The cost of not passing health care, they said, would be worse, and they were probably right. Obama’s “recovery summer” and the Ground Zero mosque provided more motivation for Republicans and helped them take back the House of Representatives. North Carolina Republicans need to avoid needlessly invoking the wrath of leftists even further in the next legislative session. They have enough on their plate as it is.

What would really help Republicans would be an improvement in the state’s unemployment rate. Then Republican legislators could say, “See? Our policies are working.” At present, however, the state is third in the nation in unemployment. That’s a statistic that Republicans, especially those in suburban districts, should be afraid of. If the current Democratic advantage in polling continues, there’s also no way Republicans are defeating Kay Hagan next year.

State Republicans have a lot of things in their favor, namely money and favorable districts. But given the state of public opinion, it looks like they’re going to be playing heavy defense this year. To avoid losses, they probably need a highly favorable environment at the national level, and right now that doesn’t look like it’s in the cards. Of course, things will change dramatically between now and next November. But Republicans shouldn’t count on the midterm environment to shield them from an unhappy public.