Located in the Albemarle Sound region of North Carolina, Perquimans County is one of the “finger” counties of the northeast. The county seat is Hertford. The name comes from the Perquimans Indian tribe, which was native to the area.

Forecast: Culturally and politically, the “finger counties” have always been slightly different from the rest of eastern North Carolina. But Perquimans is similar to other counties in this region in that conservative, white, rural voters have abandoned the Democratic Party. At the same time, the area has received significant inmigration from affluent retirees, many of whom are from the Virginia Beach area. This growth was particularly pronounced in the 2000s, during which time Perquimans boasted a strong 18.34% rate of growth. Perquimans was also more white and less black in 2010 than it was in 2000. Although the recession brought with it a reduction in the rate of in-migration, Perquimans is now solidly Republican and should remain that way for the near future.

Trivia: Perquimans is home to the Harvey Point Defense Testing Activity facility; it was recently used by Navy Seal Team Six to train for the ultimate takedown of Osama bin Laden in 2011. 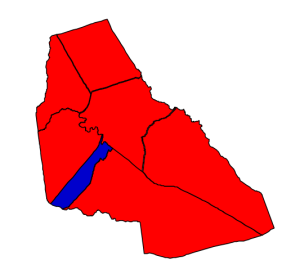