Vance County is located in the eastern Piedmont region of North Carolina, it is bordered by Franklin County to the south, Warren County to the east, Granville County to the west, and the state of Virginia to the north. The county seat is Henderson.

The county was named after Zebulon Baird Vance, governor of North Carolina and U.S. Senator and one of the most popular figures of his day. Vance County was formed in 1881 through a form of gerrymandering. In those days, blacks voted solidly Republican, making counties like Granville and Franklin too competitive for Democrats’ comfort. It was proposed that the largely black sections of these counties would be excised, along with a part of heavily black Warren County, to create a new county, thereby making Franklin and Granville solid for Democrats. The county’s namesake took kindly to this partisan arrangement and affectionately called the new county “Zeb’s Black Baby”. As of the 1890 census, Vance was 63% black.

Black residents from Vance joined in the “Great Migration” and fled the county in droves through the early 20th century, making Vance more white. But now, it is white flight that is endemic to Vance County, so the percentage of black residents is ticking up. As of the 2010 census, Vance County is just short of being majority black. Given these demographics, Vance is solid for Democratic candidates at all levels of government.

Forecast: Even relatively recent in North Carolina political history, Vance was not always out of reach of Republican candidates. George H.W. Bush lost Vance County by 6 votes in 1988, and Jesse Helms actually carried the county during his 1990 Senate race. But around the turn of the century, things began to change. Whites began to leave the county, reducing the number of potential Republican votes. Then the Obama turnout machine revved into gear in 2008, registering hundreds of previously unregistered black voters. The Obama campaign exceeded their turnout efforts in 2012, and Vance voters gave Obama a higher percentage of the vote in 2012 than they did in 2008.

Vance County’s African American voters are registered in greater numbers than their white counterparts, possibly suggesting an untapped resource for Republicans. But there’s no guarantee that many of these whites will be there for long. In the 2000s, Vance saw a 3.14% reduction in its white population. In the town of Henderson alone, it was a 22% reduction. The black population, while not growing by leaps and bounds, is still growing at 9.14%. So long as this disparity in growth exists, Republicans will continue to lose by bigger and bigger margins here.

The only bright spot for Republicans in Vance County is that part of county is in the 13th congressional district, represented by Republican George Holding. 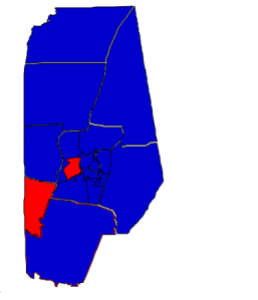