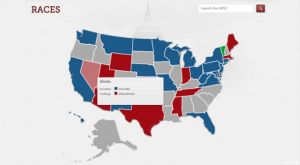 Yesterday there was an article in the N&O asserting that the NRSC was still shopping around for a candidate in the North Carolina Senate race. This came as a bit of a surprise, since it seemed like the NRSC had already decided to back Speaker of the House Thom Tillis. It has been suggested that the committee is squeamish about Tillis’s chances for victory because of his leadership in the unpopular state legislature.

That’s an interesting theory. But if so, then why would the committee meet with Phil Berger, who can just as easily be tied to the legislature as Tillis? There are also rumors that they met with Representative Renee Ellmers, who just a month ago seemed reluctant to run and even mentioned another potential candidate as someone she might support. It’s also suggested that Tillis is not polling well and has “failed to catch fire”. Well, let’s be fair to Tillis – it’s only been a month. And right now, he’s polling just fine against Hagan (he’s down 5 points, 45-40, but that’s before the campaign has even started). His current low numbers, both in the primary and general, are a function of low name recognition. An aggressive campaign can easily remedy that. Obviously, if national Republicans are having second thoughts about Tillis, it shouldn’t be because of his polling numbers.

Jim Ellis, formerly a consultant for the NRSC, in his blog stated the North Carolina Senate contest as an example of a “recruiting disappointment”. I wouldn’t go that far. A recruiting disappointment, in my definition, is the failure to attract a top-tier, “name” candidate. When there’s a recruitment failure, it usually means that one party concedes a Senate race because of a single candidate passing up on a run. An example of this is in South Dakota, where Democrats wanted Stephanie Herseth Sandlin to run. Not only would she have made a strong effort in a tough state, she was really the only competitive candidate on the Democrat side. When she decided not to run, Democrats’ chances of holding the South Dakota Senate seat pretty much went kaput.

It’s not the same case in North Carolina. Instead, we have a bench of candidates who could be strong candidates, but have never had to prove themselves statewide. There were never any “name” candidates in the Senate race to begin with (and I definitely don’t think Cherie Berry was one of them).

For another example of a recruiting ‘failure’ check out the 2008 Senate race. There were a bunch of big names who Democrats tried to persuade to run: Mike Easley. Brad Miller. Roy Cooper. All of them refused, fearing that Elizabeth Dole would mop the floor with them. Instead, Democrats got stuck with a little-known state legislator named Kay Hagan who was given little chance of victory. She won 53%-44%.

Republicans shouldn’t be dismayed by the lack of a political superstar in the field. That’s really the least of their concerns. What they should be concerned about is finding the best challenger to Kay Hagan among the available options. If Republicans pick the right candidate, then they’ll be in for a close race no matter what.

By the way, Ellmers will decide on the race on Friday. Berger will decide at the end of the month.